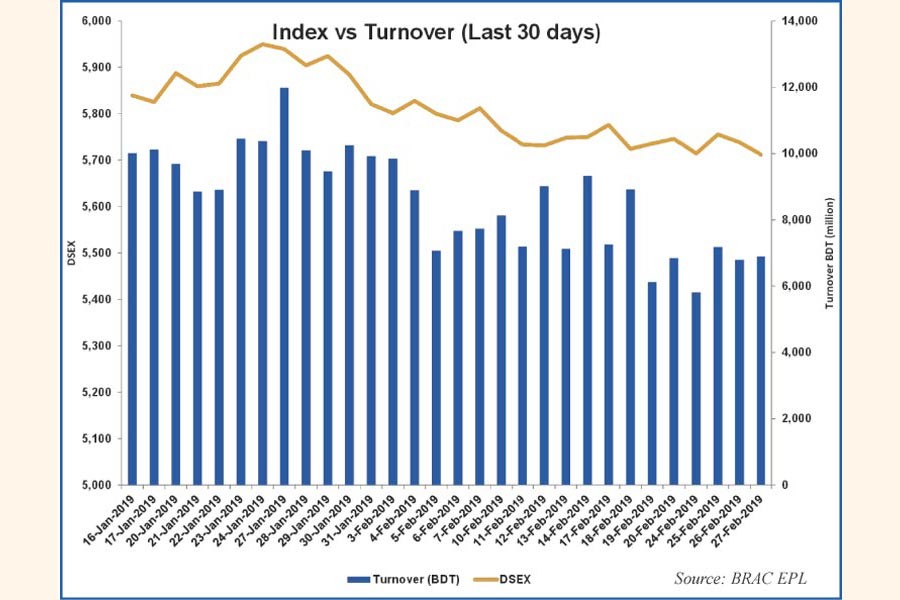 Stocks witnessed yet another bearish week that ended on Wednesday, extending the losing streak for the fifth straight week as investors continued their selling binge.

The week saw four trading days instead of five as the market remained closed on Thursday due to Dhaka City Corporation (North) elections. Of them, stocks suffered losses in three sessions while one saw marginal gain.

Banking and financial institutions sectors continued to suffer losses amid the news of bulging non-performing loans in the banking sector, said a leading broker.

Despite close monitoring by the central bank, the volume of classified loans in the country's banking system soared more than 26 per cent or Tk 196.08 billion in the last calendar year.

The banking sector lost 0.65 per cent as prices of 21 banks, out of 30, closed lower. The non-bank financial institutions sector also lost 1.49 per cent.

The total turnover stood at Tk 26.67 billion last week against Tk 29.13 billion in the week before.

The daily turnover averaged Tk 6.67 billion, registering a decline of 8.44 per cent over the previous week's average of Tk 7.28 billion.

The engineering sector posted the highest loss of 1.99 per cent, followed by power with 1.54 per cent.

On the other hand, telecommunication saw the highest gained of 2.10 per cent, followed by food with 0.88 per cent and pharmaceuticals 0.47 per cent.

Losers outnumbered the gainers, as out of 348 issues traded, 242 closed lower, 82 ended higher and 24 issues remained unchanged on the DSE floor.

Takaful Islami Insurance was the week's best performer, gaining 20.92 per cent, while Emerald Oil Industries was the worst loser, losing 29.61 per cent as the regulator has decided to 'freeze' the BO (beneficiary owner) accounts of the sponsors, directors and four top officials of the company.