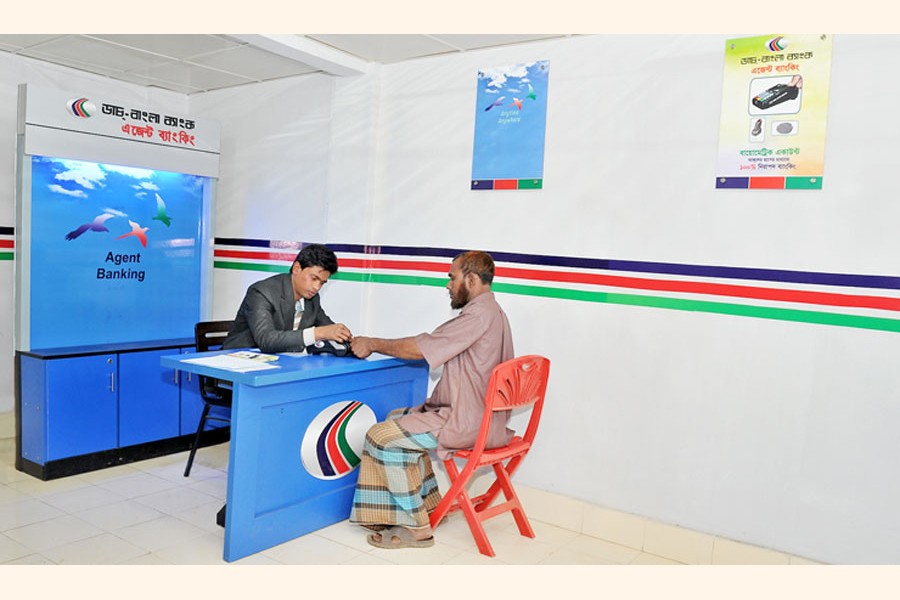 An agent is serving a bank client. —Collected Photo

Bangladesh has done exceptionally well in reducing poverty in the last five decades. Since its independence, poverty has fallen from above 80 per cent to 24.3 per cent in 2016. Various poverty alleviation and production-oriented schemes, large inflows of workers' remittances, and target group-oriented projects from the government and non-government organisations (NGOs) have helped in poverty reduction and transformed the rural economy. Effective measures on the part of the government-including promotion of agriculture, rural electrification, development of rural roads and other infrastructure-coupled with non-government efforts of around 5000 NGOs working in remote areas towards expanding health, nutrition and family planning, have been instrumental in raising socio-economic status of all groups of people in villages. Non-farm rural income has overtaken farm income and stands at about 60 per cent of rural income. The shift in the structure of rural economy over time have helped boost rural household income and the consumption to such an extent that Bangladesh corporate sector and the formal financial institutions find the expanding rural economic base as an attractive destination for their operations. Almost all major sectors of the economy are finding the rural economy--with more than 60 per cent of the country's population still living in rural areas-as attractive destinations for their products. Rural housing construction, rural consumption of processed food products, inflow of financial resources in the form of domestic (from cities) and foreign remittances have made rural households potential targets for inclusion into the broader formal economy for both the nonfinancial corporate and financial institutions.

FURTHER DEVELOPMENT AND SUPPORT FOR RURAL ECONOMY: There is high potential for increased economic activity in the rural areas. However, access to finance has been a major constraint for farmers and rural entrepreneurs. When financial service providers do not have branches that are close to the rural households, they are less likely to use and transact with banks. Micro Finance Institutions (MFIs) played a vital role in rural financial inclusion by establishing an extensive network of field staff and easier access to rural entrepreneurs. Thus, with no bank in proximity and lack of familiarity in dealing with banks, the rural household/entrepreneurs end up getting more expensive loans from MFIs and other sources-while they could have availed loans at a much lower and at times subsidised interest rates from the banking channel.

AGENT BANKING-PROGRESS OVERTIME: One of the primary impediments to providing financial services to the poor through bank-based delivery channels is the high costs inherent in traditional banking methods. The amount of money expended by financial service providers to serve a poor customer with a small balance and conducting small transactions is simply too high` to make such accounts viable. Banks thus required more cost-efficient ways in disbursing the capital needed to support agriculture and other rural SMEs. Accordingly, banks have developed novel delivery models, like agent banking, to reach out to the potential rural customers with accessible, safe and cost-efficient access to formal financing and fundamentally altered the economics of banking for the underserved rural communities.

The agent banking model was introduced in Bangladesh in 2013, with the central bank awarding 28 commercial banks licences for operating agent banking operations across Bangladesh. Since then, the number of agent banking account holders has reached more than 16.5 million. Services are provided by designated banking agents-who are generally local business persons with own premises as agent banking outlets which are equipped with hand-held tabs and computers with internet connections, point of sale (POS) devices, mobile phones, barcode scanners, and biometric devices. Agents provide select banking and financial services, such as cash?in and cash?out, utility payments, bank account openings, various savings instruments, and fund transfers. Along with deposit taking, lending activities are gaining momentum. A total of 19,981 outlets were being operated by 14,509 agents as of August 2022. Most of the agents (85 per cent) and outlets (86 per cent) are located in rural areas (as of August 2022, according to Bangladesh Bank statistics). Agents are typically members of the community, allowing them to build personal and trusted relationships with customers who may have been hesitant to access formal banking services in the past due to mistrust, financial illiteracy, or the long distances they had to travel.

At present, the number of banks operating agent banking activities has increased to 31, with top five banks accounting for 78 per cent of the outlets. Bank Asia had the highest number of agents at 5,186 or 36 per cent, followed by Islami Bank, Dutch Bangla Bank, City Bank and BRAC Bank. Transactions through agent banking accounts have been growing rapidly and rose 43 per cent year-on-year to Tk 5.65 trillion in fiscal year 2021-22 as an increasing number of people were opening accounts and using them for various purposes, including deposits and withdrawals, transfer of funds, receiving foreign remittance and bill payments. Inflow of remittances through the agent banking outlets also increased sharply and crossed Tk. 1 trillion mark during January-October 2022 period. The number of transactions and amounts were both higher in rural areas at 85 and 84 per cent of overall transactions, respectively. Eighty per cent of the loan accounts belongs to rural regions. However, it has been observed that the number of male loan accounts were 3 times higher than the number of female loan accounts across all divisions.

ECONOMICS OF AGENT BANKING: According to research, operating agent banking systems is typically 3 times less expensive and, in certain situations, 86 per cent less expensive than operating traditional branches. The cost reductions are mostly attributable to parent banks utilising their existing retail locations and agents, eliminating the need for them to invest in new infrastructure. Although agent banking incurs higher variable costs from commissions to agents and communications, fixed costs per transaction for branches are significantly higher.

Research indicates that using an agent as opposed to a branch will result in more than 70 per cent lower costs for an account that processes two deposits and two withdrawals each month. Additionally, transactional accounts can make money off the transaction services provided such as bill pay, account transfers, etc. A transactional account conducting two deposits and two withdrawals per month is only profitable through a branch if it has a balance greater than $200. In contrast, the same transaction account can be profitable through an agent channel, even with a balance of less than $75.

OTHER DEVELOPMENTS IN AGENT BANKING: Agent banking proved to be an effective model to expand the reach of financial services to rural communities, even during times of crisis. Agent banks were already becoming a core part of the bank model, but during Covid-19 they proved to be critical in continuing banking operations when hours of operation for brick-and-mortar banks were limited during the Bangladesh government implemented lockdowns. As demand rose for financing the growing rural economy, agent outlets bridged a critical gap.

Additionally, the model has expanded quickly among women. Its structure often benefits women where social norms restrict women's mobility to travel to banks or where women's ability to interact with individuals of the opposite sex in public places is limited or even prohibited. According to Bangladesh Bank data, with over 8 million female accounts, women hold around 49 per cent of all agent banking accounts. There is however potential for greater inclusion, both in terms of number of female owned accounts and also agents, as a recent survey (conducted by Innovision Consulting) found the total number of female agents to be only 250. In a recent Policy Research Institute survey of 2000 randomly selected MFS agents surveyed from eight administrative divisions, around 99 per cent were men-highlighting the need for further gender balance in hiring of agents.

POTENTIAL CHALLENGES: Proximity remains very important for greater adoption of agent banking. Fees on transactions through agents are not higher than in traditional banking channels. However, given the benefits of greater proximity, we believe there may be increased customer willingness to pay for transaction services delivered nearby. Thus, there should be more agent banking outlets in closer vicinity. Another issue is that the distribution of outlets was uneven, as Dhaka had the maximum at 25 per cent, while Mymensingh and Barisal had 6 and 7 per cent, respectively. District-wise, Bandarban has the lowest number of agents and outlets at 33 and 41 respectively while Ruma upazilla has the lowest number of agents and outlets, with only one agent and outlet in the entire upazilla.

A potential impediment to the proliferation of agent banks is the limited capacity of agents, as banks cannot rely on agents to cross-sell financial products. As a result, in order to increase overall customer profitability, banks may need to incur additional costs in marketing and deploying sales forces, including branch employees, to cross-sell additional financial products to agent banking customers. Back-office and technology costs may vary depending on the delivery channel, since a bank may lean towards more complex and higher-cost core banking systems. The ability for agents in rural areas are limited and might not be suitable for technology for more complex financial services in the future. Under these circumstances, digital and financial training of agents will be necessary.

INTERNATIONAL BEST PRACTICES: Agent transaction platforms improve the economics for these providers compared with branches, especially for high-transaction, low-balance accounts that are common among poor users. While POS-enabled agents increase the pool of profitable consumers, mobile-based agents and mobile wallets can push the profitability frontier even farther. Mobile wallets and agents with mobile capabilities have cheaper acquisition costs. Mobile wallets and bank accounts connected to a mobile wallet are able to attract consumers at less than 70 per cent of the cost of a branch or POS-enabled agent by employing mobile phones in place of payment cards. Furthermore, the fixed cost per transaction can be as low as 4 cents for a mobile-enabled agent or mobile wallet. In some countries, mobile wallets may also benefit from lower-cost Know Your Customer (KYC) requirements, such as the electronic submission of photographs and documents like NID and doing away with certified photocopies of documents etc.

FUTURE OUTLOOK: As agent banking is gradually taking shape, it has great potential to bring mainstream banking services to rural Bangladesh and provide valuable access to credit to rural entrepreneurs, particularly women and youth. As it further matures and expands across Bangladesh, access to finance will become much easier and the market should become competitive offering funds at lower costs along with broader access. Adoption of technology and increased data capturing and processing by banks will reduce loan approval time and administrative costs. At the same time, upgrading the overall skill level of the agents will be crucial since they will be the prime drivers of expanding banking services in rural communities.

The development and proliferation of agent banking will also force MFIs to improve their efficiency and reduce interest rates they charge, as increased proximity of agents to customers, and enhanced awareness about the various financial services will make customers opt for agent banking instead of their reliance on MFIs. Mobile financial Service (MFS) providers like bKash, and Nagad-backed by technology and large data processing capacity--are also likely to offer nano loans aimed at micro and small borrowers. In this competitive field, most smaller MFIs will struggle to match the efficiency and lower rates that banks and MFS providers would be able to offer to the rural population.

While the lower interest rates and greater access to finance will be positive and welcoming developments, ensuring faster financial inclusion of women may still remain a challenge. A recent study finds that women entrepreneurs prefer to work with female agents. Banks should be hiring more female agents in an effort to reach more female customers and build a more inclusive model.