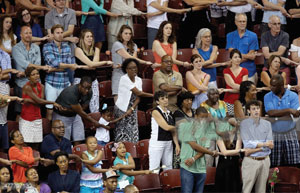 Thousands of people hold hands and sing \'We Shall Overcome\' during a prayer vigil for the nine victims of the Emanuel AME Church shooting at the College of Charleston TD Arena June 19, 2015 in Charleston, South Carolina.

A white American sat an hour with 15 others, all blacks, in an African-American Church in Charleston, South Carolina and participated in a Bible study group. He then turned his gun and killed instantaneously eight of the participants including the Pastor who was also a state senator. Another he shot in cold blood later died in hospital. The killing has been identified as a federal hate crime. The killer, 21-year-old Dylan Roof, was apprehended 14 hours after escaping from the scene of the crime.

It was Charleston, South Carolina where a few months ago, another racial crime, that of the death of a black man Water Scott by a white racist cop, had attracted the attention of the whole of USA. This one, named instantly in the media as the Church Massacre, has so far drawn exceptional reaction across the country, including in the national capital. President Obama as a rule appears in the media after such mass shooting deaths that are increasingly becoming too frequent. This time too he addressed the nation, his 14th such address that has now become a regular presidential ritual.

The Church Massacre has occurred at a time when the president is under increasing attacks from his opponents on a number of issues including deteriorating race relations that, according to the media, has worsened in the past six years. Therefore, the massacre in Charleston, tragic as it is, has also provided him the opportunity to bring the race issue in the national radar and link it to the issue of gun control to defend his presidency from attacks on deteriorating race relations. The president also underlined the "dark part" of US history to defend his credibility and that of his presidency.

Apart from the fact that those killed were all blacks, the history of the church where the massacre occurred is also very significant. The church, Emanuel African Methodist Episcopal (AME) Church is an all black one and has a proud history in the development of civil, racial and religious rights of blacks in Charleston in the face of racial hostility from whites in the city. The church was established in 1791 with free blacks and slaves as members of Charleston's Methodist Episcopal Church. In 1816, the blacks broke off from their white counterparts in a dispute over burial grounds and formed the all-black religious church that it has been ever since. In the early years as an all-black church, its ministers were jailed for breaking then existing law that prohibited gathering of blacks without white supervision.

In 1822, the Church was torched because it was suspected as a meeting ground for rebellion against slavery. As many as 313 of its members were arrested and 35 were executed. The Church was rebuilt but was outlawed in 1834 when the state legislature made exclusively black churches illegal. The AME resurfaced after President Lincoln made slavery illegal. It was a major destination of civil rights leaders such as Martin Luther King during the civil rights movement of the 1960s.

President Obama knew the pastor, who was killed in the massacre, personally and also some of other parishioners that made his address both emotional and powerful in underlining the root causes of the Church Massacre.

The detestable nature of the hate crime, the reasons behind it and the history of AME were thus the major issues that Obama touched in his address. He expressed his frustration and sadness at mindless and senseless deaths that occur with eerie regularity all over the United States. The president unequivocally said that these senseless and mindless deaths do not occur in any other country and held the US gun laws responsible for these deaths - an issue that divides Americans in a manner that perhaps few outside America would understand. Those who support the gun laws despite their blatant and criminal misuse are those who believe that it is historically and fundamentally their right to defend themselves with arms from any interference they think is unacceptable, private or public.

Obama in his address mentioned the four girls who were killed in terrorist bombings by anti-black white supremacists in the Birmingham Church in 1963 and Martin Luther King's eulogy: "They lived meaningful lives and died nobly." He likened the Church Massacre with the Birmingham deaths that he said once again brings to surface memories "about a dark part of our history." The president has not missed out speaking on that dark history, the hatred for the blacks, through the many incidents involving deaths of blacks in shootings that have occurred during his term so far, particularly of those at the hands of trigger-happy white policemen.

President Obama in his address this time did what he has done many times before. He once again reminded his fellow citizens that the US gun laws cannot anymore be allowed the force of fundamental rights as it is under the First Amendment. He forcefully demanded amendment of the gun laws. These laws, he pointed out, allow white supremacists and criminals to acquire guns and carry out their evil intentions where the victims are almost always innocent men, women and children - and in hate crimes, blacks.

The Church Massacre has also brought to the surface a very dangerous perspective hitherto unknown. Dylan Roof had told his friends that he must do something to stop the blacks from taking over the world. Before he started shooting inside the church, he said calmly and unemotionally that he had come to "kill blacks" and then started shooting.

Dylan Roof has been described as a member of a white supremacist group. He was allowed or perhaps tutored to act individually so that his group and its links with other such groups spread all over the US would not be exposed. If the assumption that these groups are now encouraging their members to act individually is a correct one, these white racist groups seem to have adopted the same strategy that Islamic terrorist groups operating in the West are being accused of pursuing. The US government would then have an unimaginably difficult problem to deal with. First, these individuals would be extremely difficult to track and isolate. Second, they would have as easy access to guns as buying cigarettes from a store.

The Church Massacre is, therefore, a very strong warning bell for all Americans. It underlines not just deep malaises in the gun laws, it also underlines that the establishment of civil rights in the country notwithstanding, in the minds of many Americans, blacks still have no rights to be equal to the whites. In fact, President Obama himself knows this too well. He is a two-term president who has successfully reascued the country from the brink of economic disaster. Yet he has been pursued almost every single day of his presidency in a manner that can be explained by the fact that he is black.

The majority of Americans nevertheless have been deeply affected and saddened by the Church Massacre and find it detestable in extreme terms. Unfortunately, they do not see it the way President Obama does. They seem willing to view it as the action of a demented individual that does not represent those of any large section of Americans. In taking such a view, they are in denial of the fact that such actions against the blacks (and rise of white supremacists) can no longer be dismissed as individual acts because of the frequency with which these are occurring. Sadly, the same Americans have no problem in linking Islam to violence because a few of its followers commit hate crimes.

The writer is a retired Ambassador.