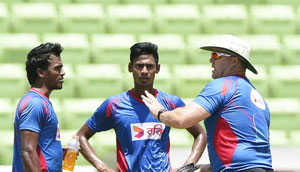 The battle will begin at 3:00 pm Bangladesh time.

Bangladesh took the advantage of 1-0 lead in the series with their biggest-ever margin victory of 79 runs against India in the first match that spurred by debutant Mustafizur Rahman five-for Thursday last.

With this win Bangladesh brightened their chance to play in the ICC Champions Trophy as they moved up to 7th place with 91 rating points from 8th slot in the ICC ODI ranking list leapfrogging West Indies.

The Tigers have shown their consistent performance as they won their first match in last two ODI series each at home, against Zimbabwe and Pakistan.

Including the 79-run victory on Thursday Bangladesh beat India for four times among their 30th in ODI meetings. The three other wins - in 2004, 2007 and 2012 - came at irregular intervals.

In the first ODI Bangladesh scored 307 runs which was also the biggest score against India in ODI format.

Mashrafe Bin Mortaza's side is likely to remain unchanged with the new four pacers as the Tigers' captain has full confidence over his fast bowlers to continue their series victory mission while Rohit Sharma, at the pre-match press conference, didn't give any indication to bring change in India squad.